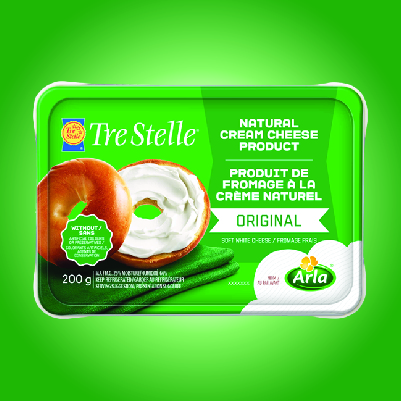 This dish is typically made for Christmas, but it is far too excellent to be limited to the holidays. This is a fantastic way to end a meal with friends or family.

Preheat Oven to 350ºF (175ºC). CRUST: In a medium bowl, combine crushed gingersnaps, sugar, melted butter, and salt. Using a flat sided measuring cup, press the mixture into the bottom and 1" up the sides of a 9-inch springform pan. Bake the crust for 10 minutes; remove from oven to cool while making the filling. FILLING: In a large mixing bowl, using a handheld or stand mixer beat Tre Stelle® Cream Cheese, sugar, and flour until combined. Scrape sides of bowl; add sour cream and vanilla, continue to beat until combined. Add one egg at a time, mixing at low speed just until blended. Pour filling into crust and spread evenly. Bake for 50-60 minutes - the centre of the cheesecake will have about 2-3 inches of a wobbly spot in the centre. Remove from oven; run a knife or spatula around rim of pan, cool completely and refrigerate at least 4 hours before garnishing and serving. CRANBERRY TOPPING: In a large saucepan, combine the cranberries, sugar, and water. Bring to a boil; reduce heat and simmer for 3 minutes or just as cranberries begin to pop. In a small bowl, combine orange juice and cornstarch, stir to combine, and add to saucepan. Bring to boil again; cook and stir 2 minutes or until mixture is thickened. Remove from heat, cool, and refrigerate before topping cheesecake.